As a programmer, a lot of my working day consists of reading text, whether editing source code, interacting with a terminal or puzzling over debugging messages. Using color to highlight or delimit parts of that text can make scanning long blocks for patterns or finer detail easier.

This screenshot shows two terminals. The top one is vim (editing C++), the bottom one is bash. 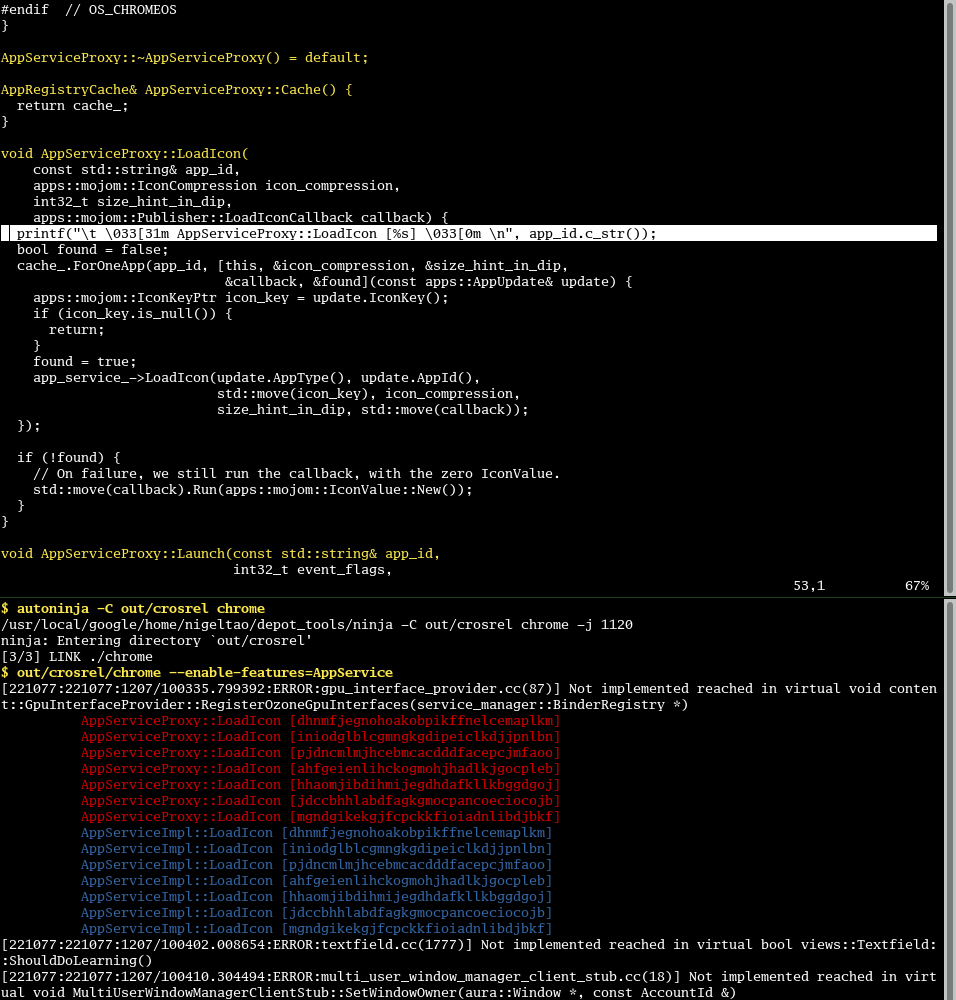 In my C++ code, I don’t like traditional syntax highlighting. I find colorful Christmas-tree text distracting. Instead, I want to be able to quickly see where classes and functions start. I make that stand out (yellow vs white, on black) the way section headers in this document stand out by being set in bigger or bolder fonts.

The /^[a-zA-Z].*/ regular expression isn’t 100% accurate at parsing C++ declarations, even assuming clang-format‘ed C++ code. But it doesn’t have to be perfect. The simple thing works well enough.

In my terminal, I like the things that I type to be yellow and the computer’s response to be white.

You may need to change xterm-256color to match your default environment’s $TERM variable. Or do something smarter with the tput program. But once again, this simple thing works for me.

In my printf debugging, I use ANSI color codes like \033[31m to make different printf or log statements distinct, especially from other people’s existing (vanilla white) log messages. For example, all the printf’s in the Foo class could be red (31m), the Bar class gets blue (34m), and it’s easier to eyeball that every Foo call leads to a matching Bar call, or that “a red log line should be followed by five-ish green lines then a blue line”. If that expectation isn’t true, it stands out. I don’t check these colorful printf’s in, this is just while I’ve got work-in-progress.

I do it like this, defining a macro in my ~/.vimrc file:

The first two 033 instances, octal numbers for the ANSI ESC character, are double backslashed because they’re part of the C string literal inside the Vim macro, and will be written out (e.g. to stdout or stderr). The final 033 instance is single backslashed because it’s only in the Vim macro, and escapes (gets you out of) Vim’s insert mode. The subsequent FXcl encodes Vim commands that sets you up to edit the placeholder “X” message.

The “Shell Prompts” section above adds contextual highlighting to a terminal session, something akin to a dialogue between me and my computer. With dialogue between humans, I don’t imagine that ‘traditional’ programming-style syntax highlighting, where nouns are red and verbs are blue, would be helpful.

It’s not a novel idea, in that I’m sure chat clients have been doing this for ages, but I sometimes wonder if e.g. reading a book, graphic novel or screenplay would be easier if different people’s lines were in different colors.