The QOI lossless image file format was announced about a year ago. It’s remarkably competitive with the ubiquitous PNG lossless image file format, in terms of compression ratio, given that the QOI prototype was only 300 lines of C code with no dependencies (except for really basic stdlib things like malloc and memset). That’s since blown out to 650 lines of code, although the first 200 of those are comments.

The QOI code was comprehensible, so I played around with extending it (in an file format incompatible way) to produce the QOIR lossless image file format.

(I’m not the only one to extend QOI like this, although e.g. MarcioPais/SIF does not support images with an alpha channel. Being limited to fully opaque images is a valid game to play, but it’s a different game from the one that QOIR is playing.) 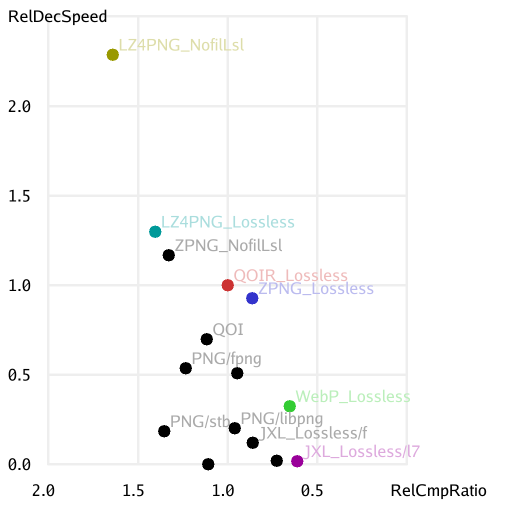 Having done that experiment, though, I learned a couple of things.

One is that, for “maximum 8 bits per channel” lossless, WebP is at a pretty good place on the “decode speed versus compression ratio” Pareto frontier. It also has the benefit that caniuse.com reports more than 97% browser support today. VP8L is not a complicated codec. It shouldn’t be that hard to write a single file C library for decoding WebP lossless. But that would be another story, for another time.

catid/ZPNG is also very simple (around 700 lines of C++ code plus a zstd dependency), and hence extensible, but also on the Pareto frontier and close to QOIR. It might be interesting to combine it with other ideas from QOI/QOIR, WebP lossless and elsewhere, and see how far we can push the frontier out. But that would be another story, for another time.

Roll Your Own Format

A meta-lesson from QOI (300 lines of code) and ZPNG (700 lines of code plus a zstd dependency which you can substitute an LZ4 dependency instead) is that it’s not actually that hard to roll your own image file format, if you care more about codec speed than compression ratio, or if you have a CPU budget or code size budget. And you don’t care about interoperability or wider adoption.

For example, if you have a relatively wimpy camera that streams out a 160×120 grayscale image, it might be fun to see how far you can push something like combining: