Update on 2022-04-21: if your web browser doesn’t have all of the necessary fonts (so that some symbols below look like empty boxes), there’s a PDF version of this page that will look better.

COVID-19 has meant that I’m unexpectedly home-schooling my young child to read and write. In doing so, it’s pretty obvious that English spelling has much room for improvement. Wikipedia’s English-language spelling reform page opens with:

For centuries, there has been a movement to reform the spelling of English. It seeks to change English spelling so that it is more consistent, matches pronunciation better, and follows the alphabetic principle. Common motives for spelling reform include quicker, cheaper learning, thus making English more useful for international communication.

My motivation was less worldwide reform (it ain’t going to happen) and more an intellectual exercise to keep my wandering mind engaged whilst reading children’s literature out loud. I’ve designed an English phonetic alphabet called Mı~Le~Nıε~L (or, in ordinary English, “Millennial”). An alternative Romanization (see below) is miileeniol.

Trying to capture both American and British pronunciations (e.g. rhoticity), let alone a menagerie of regional dialects, with a single phonetic spelling is a lost cause. This document uses Received Pronounciation (RP), generally associated with the south of England.

Many others have tried this before. To sample just a few, the International Phonetic Alphabet (IPA) is the most famous system, but by being universal (not just English) and precise (able to discriminate American and British English), it’s also complicated, with over 100 letters and 50 diacritics. Deseret and Shavian are more focused, but to somebody who already and only knows English spelling, they look alien. You need to explicitly learn the system before being able to even guess how to read this or that. There are many other designs, each with their own trade-offs.

Mı~Le~Nıε~L re-uses most of the English alphabet, borrowing a little more from the Greek and Cyrillic alphabets to complete a set of 30 letters (24 consonants and 6 base vowels) and 2 diacritics (used only for vowels). Every English consonant and vowel has a unique Mı~Le~Nıε~L letter (or letter and diacritic). Only diphthongs are digraphs.

Today, billions of people already read English and millions of people already read Greek and Cyrillic, so Mı~Le~Nıε~L uses Γ and Ж for the “ng” and “zh” sounds instead of IPA’s “ŋ” and “ʒ”. Using a Greek delta “Δ” or theta “Θ” may not be as faithful as using the Old English eth “ð” or thorn “þ”, but the trade-off is greater familiarity for many. The Mı~Le~Nıε~L vowel ε~, a schwa, is more like the IPA “ə” than the IPA “ε”, but “ə” is not part of the Latin, Greek or Cyrillic alphabets.

A key design goal is that many people who already know English should be able to read Mı~Le~Nıε~L (perhaps slowly, with a bit of guesswork) without having to study beforehand.

That’s partly because consonants are always tall (cap height) and vowels are always short (x height), so it’s possible to focus only on the consonants, most of which are the same as in English. Ppl cn ftn stll rd nglsh txt whn th vwls r rmvd. See also: Abjads.

Here are a couple of sample Mı~Le~Nıε~L texts. There are more further below. Those of you who enjoy word puzzles might like to cover up the right hand side (the red English text) and try to read the left hand side (the equivalent blue Mı~Le~Nıε~L text). Remember that pronunciation is (non-rhotic, southern) “British”, where some “r” sounds are dropped (from an “American” perspective). 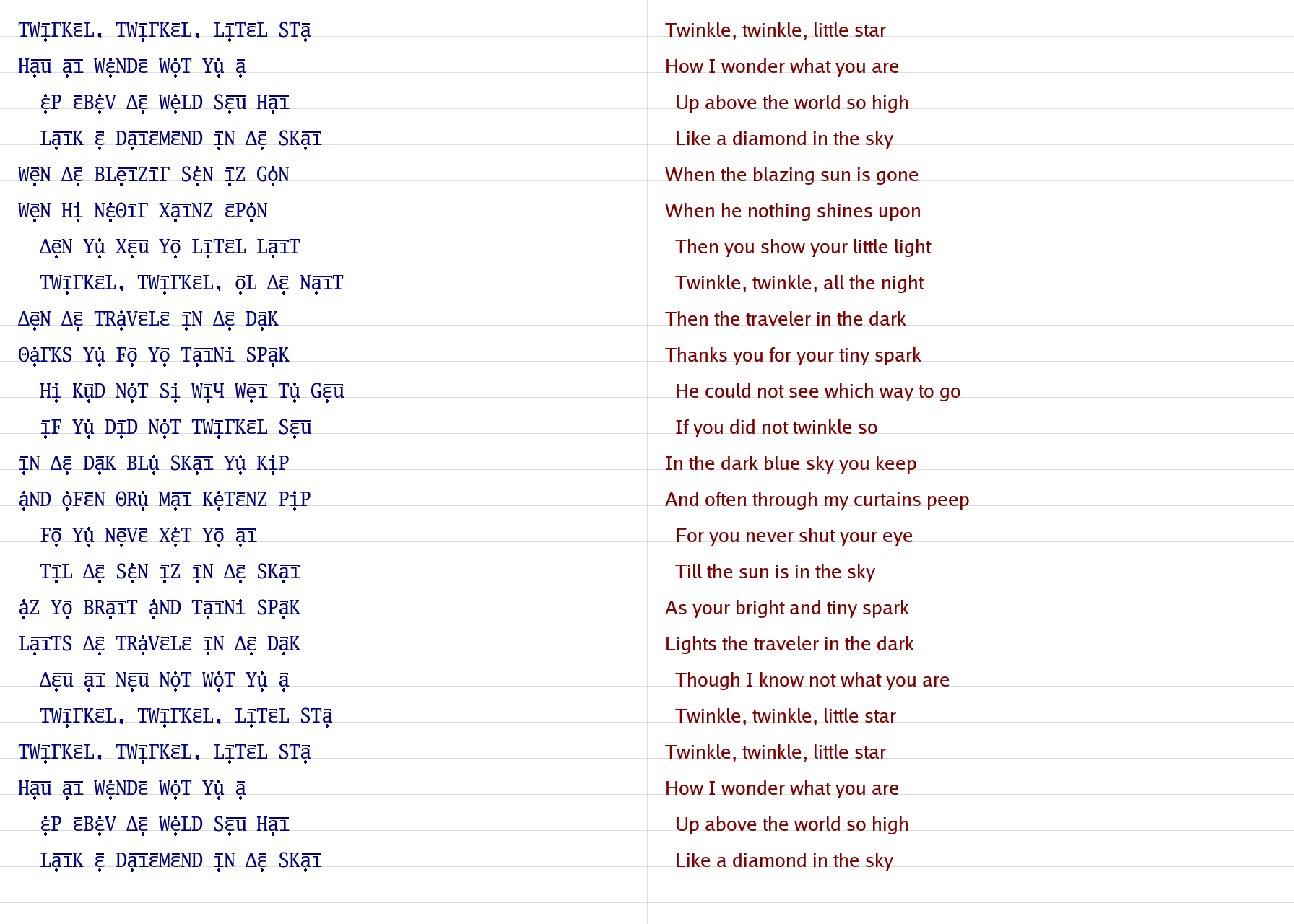 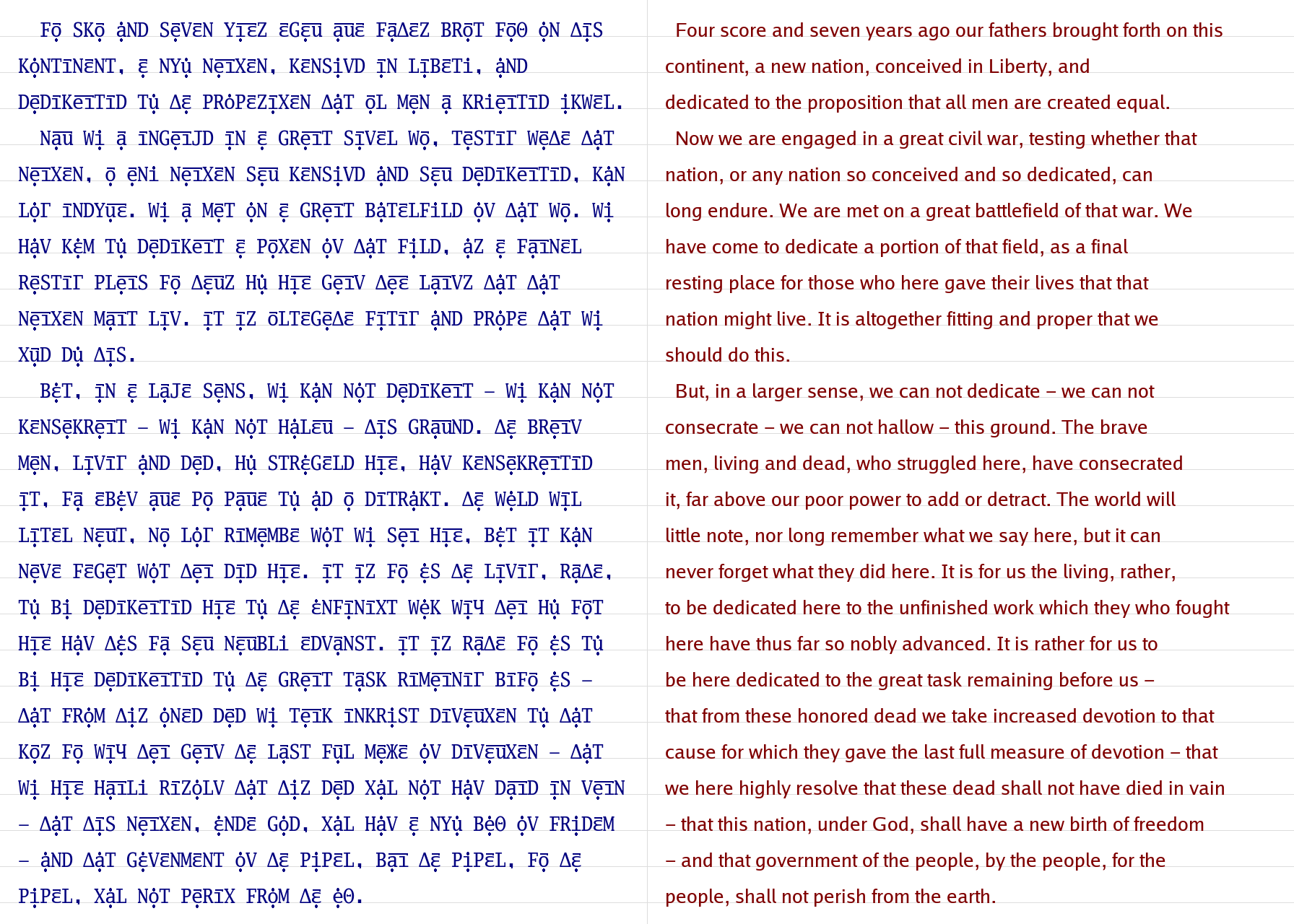 There are 24 consonants. There are 12 vowels, combining a base vowel (there are 6) and a diacritic mark (a dot or vertical stroke ' or a horizontal line ~) over the base. There are 8 diphthongs, which always combine two overlined vowels and the line literally joins the two letters as a ligature. An implication is that two adjacent vowels that don’t share an overline form separate syllables. For an example, see “created” in the Lincoln text (the second example above). An optional underdot denotes a stressed syllable.

In the following tables:

Vowels can be arranged like the IPA vowel chart.

Vowels and diphthongs can alternatively be arranged by their 2-letter Romanization. 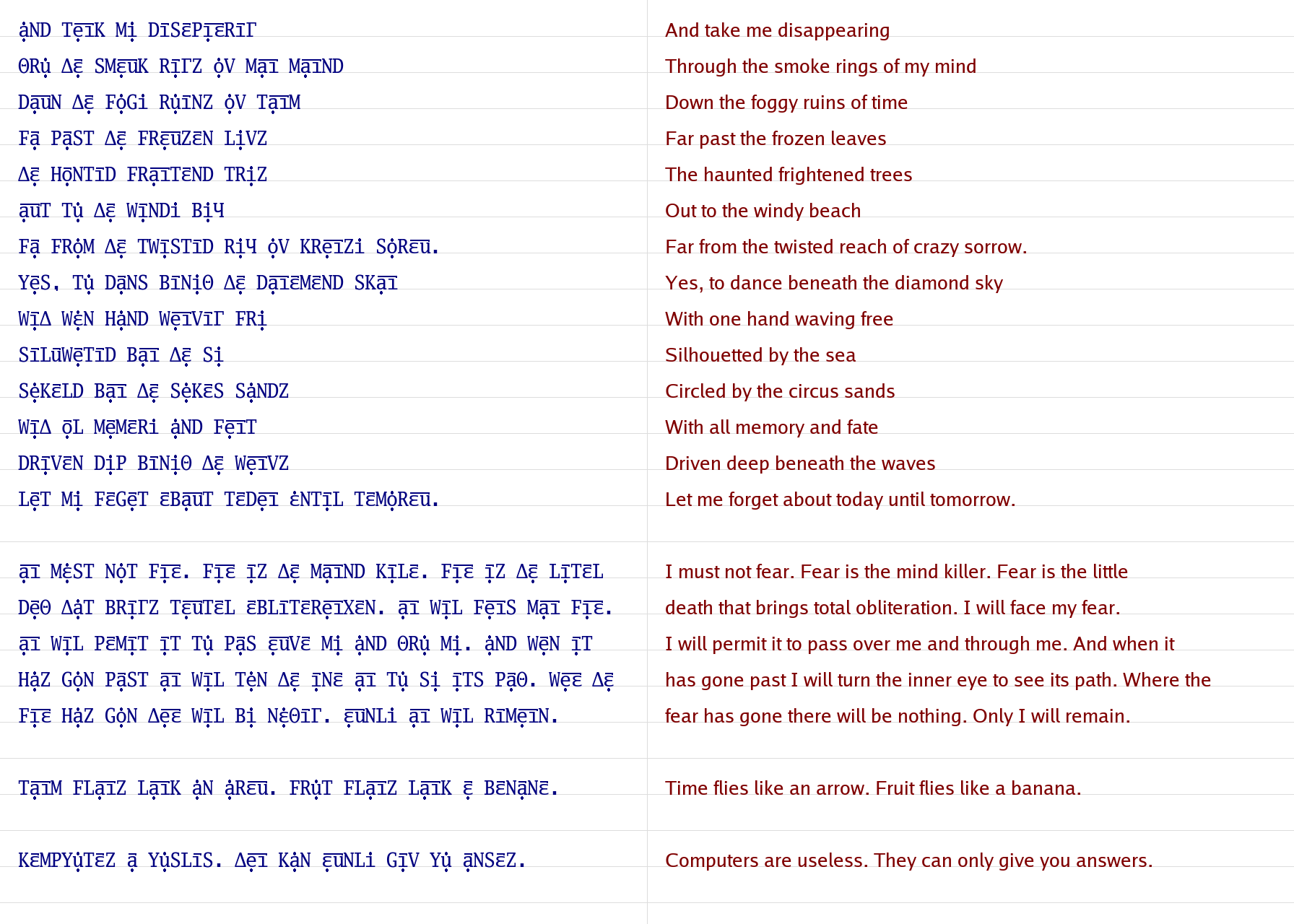 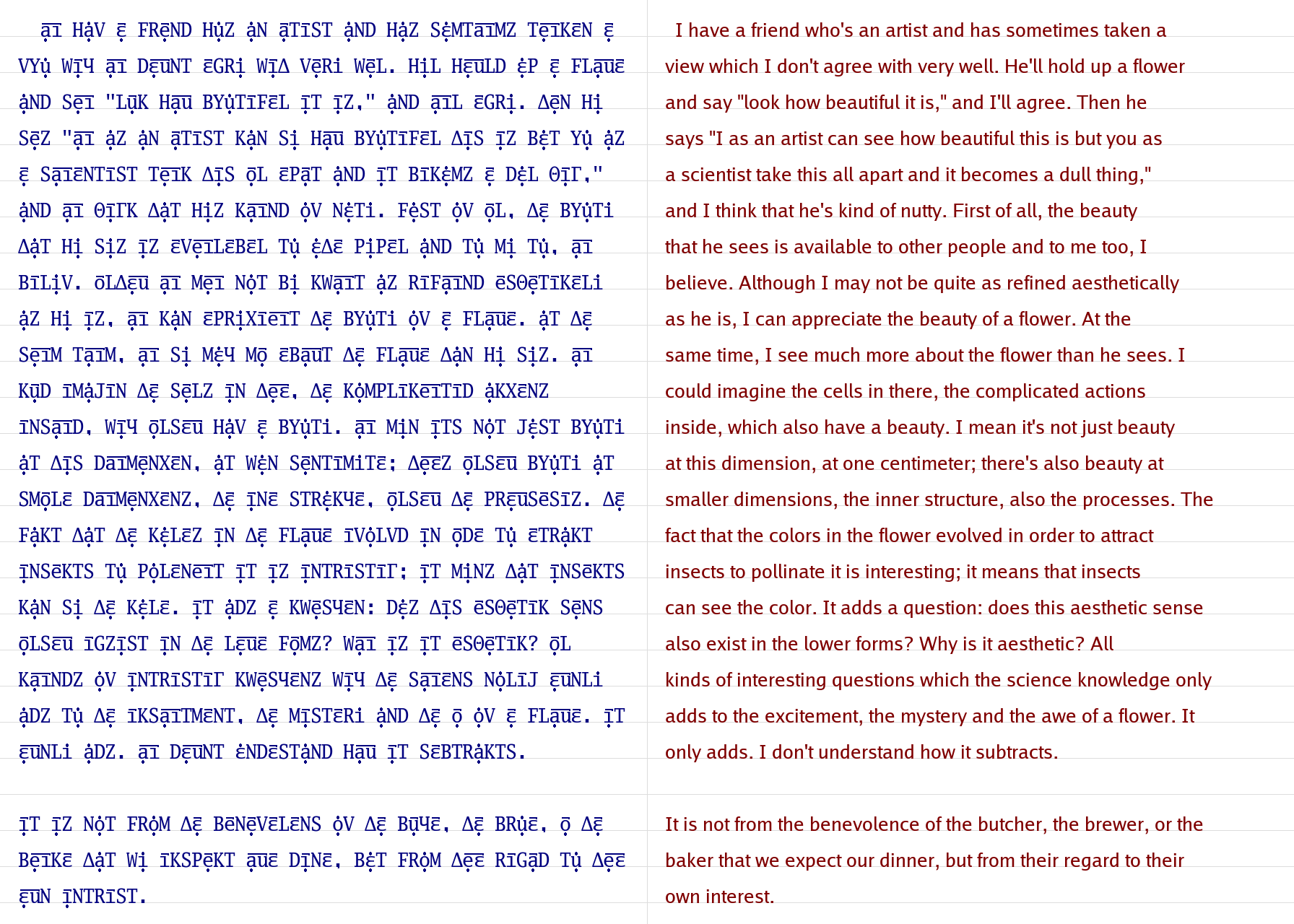 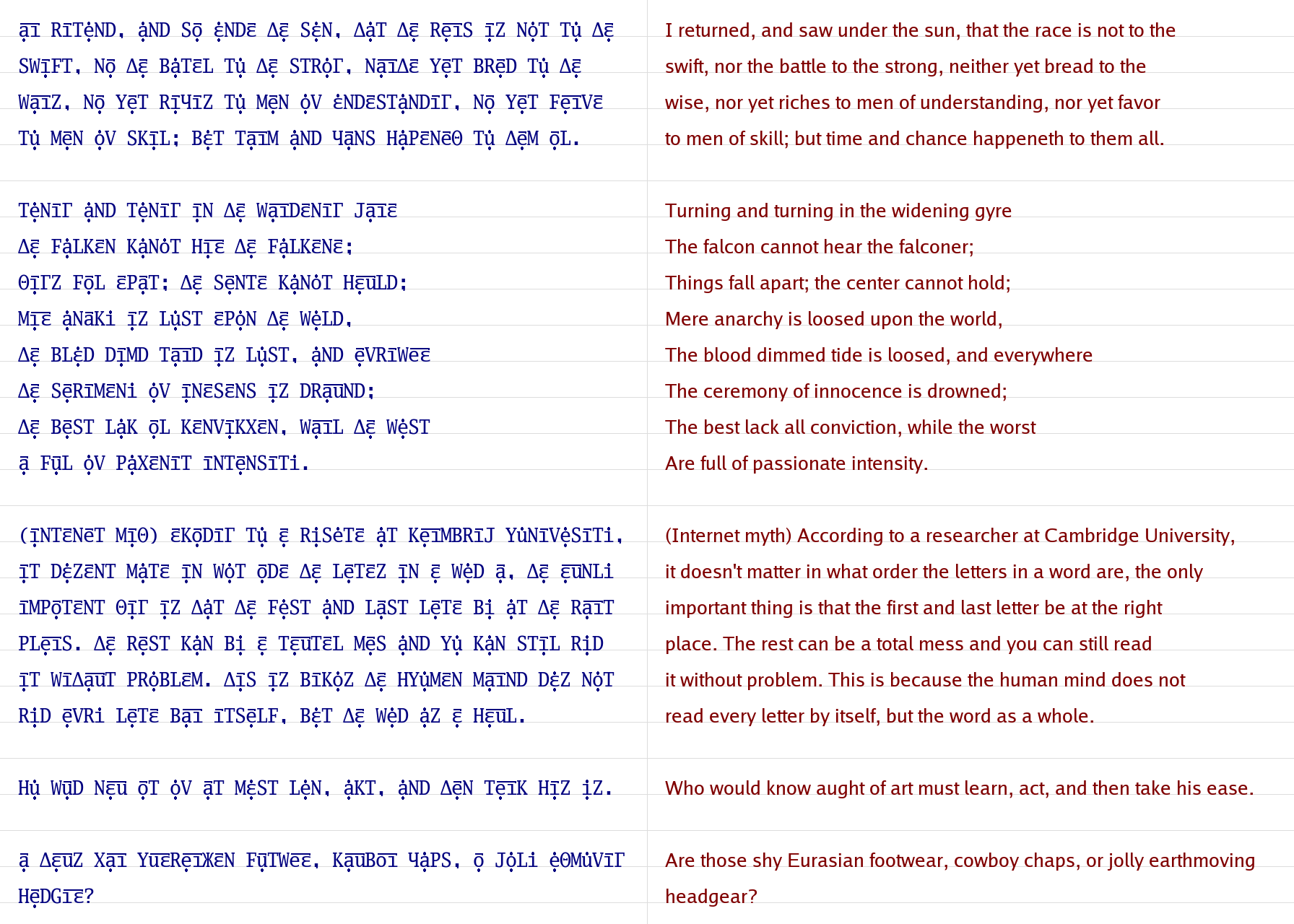 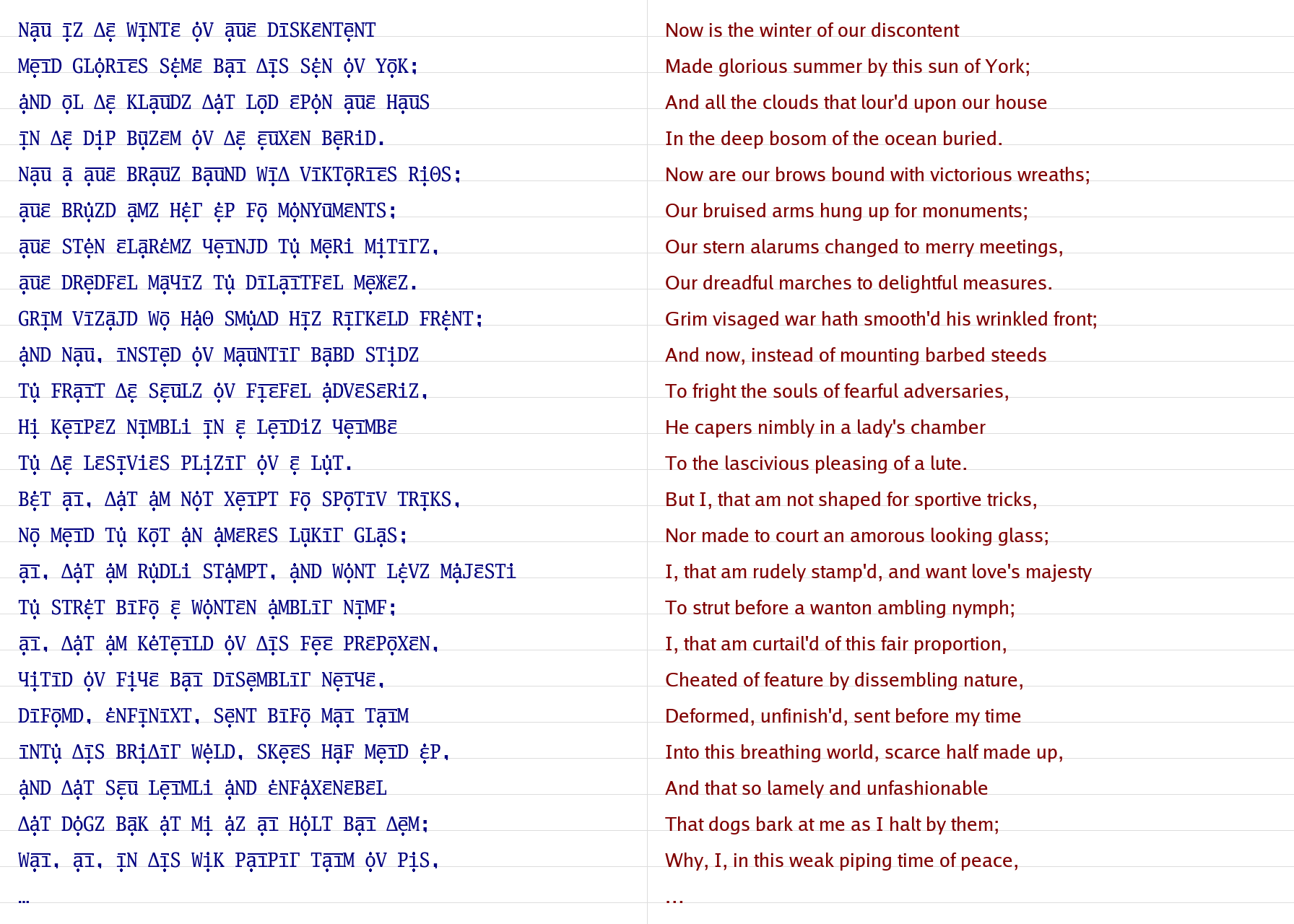 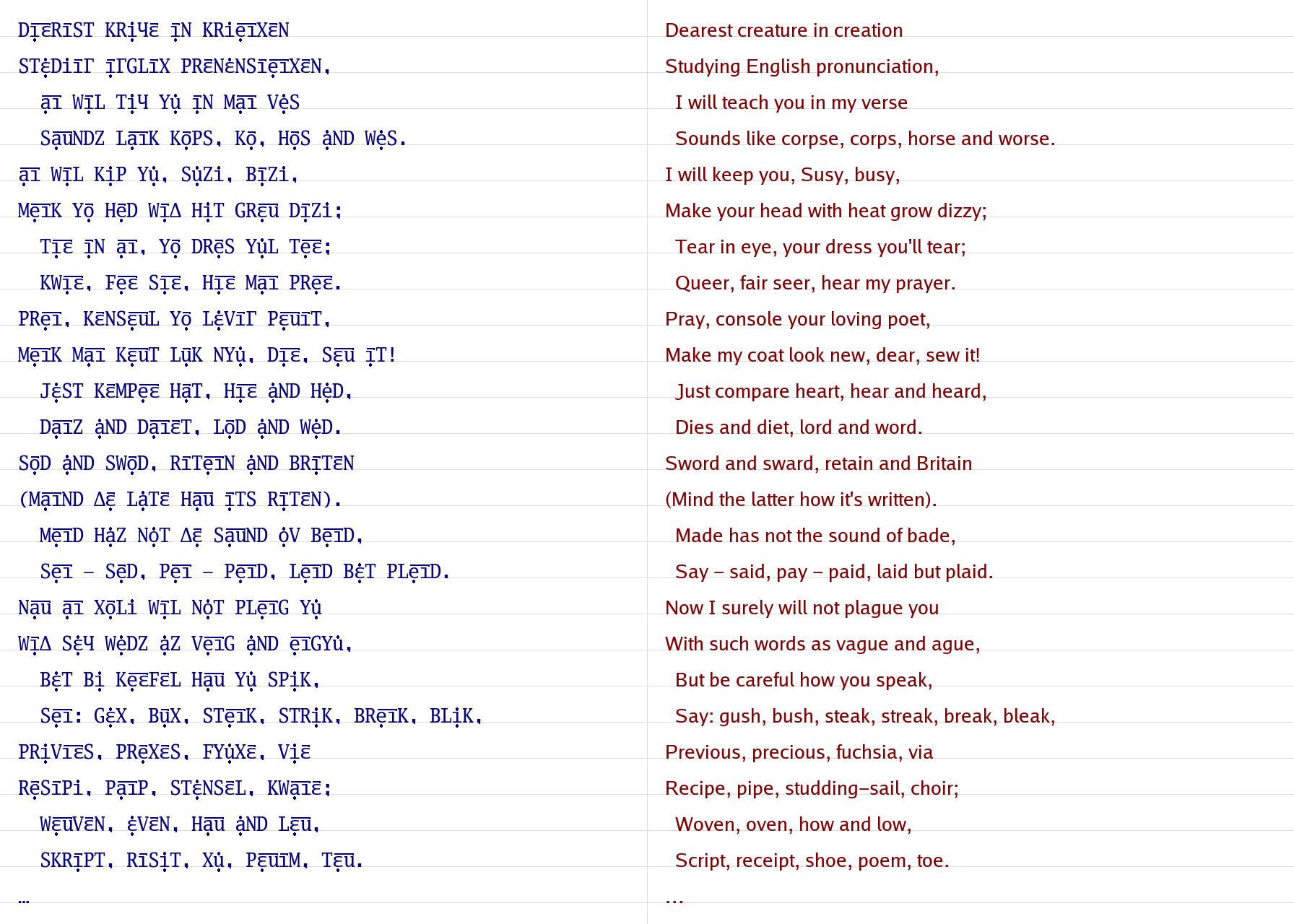 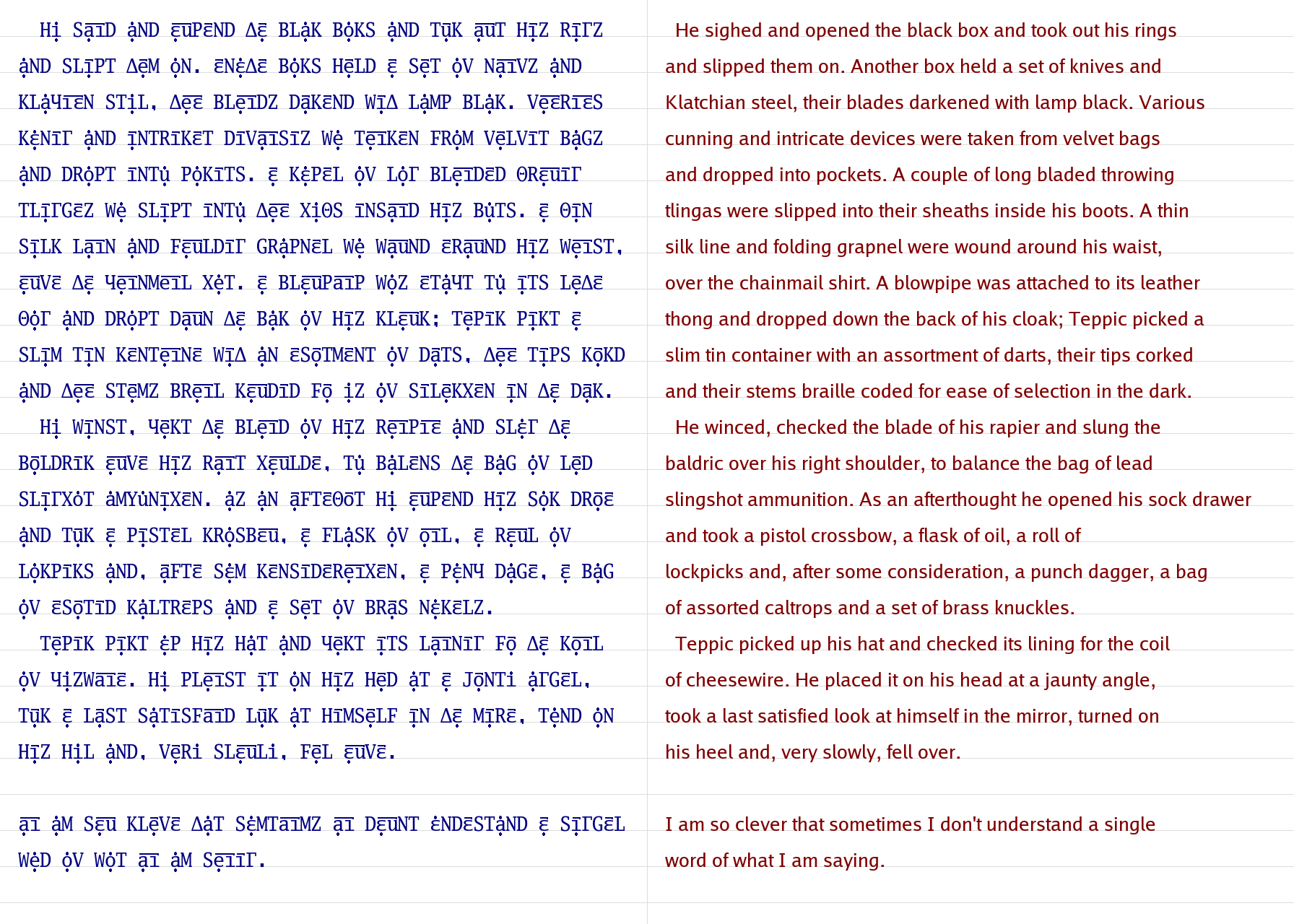 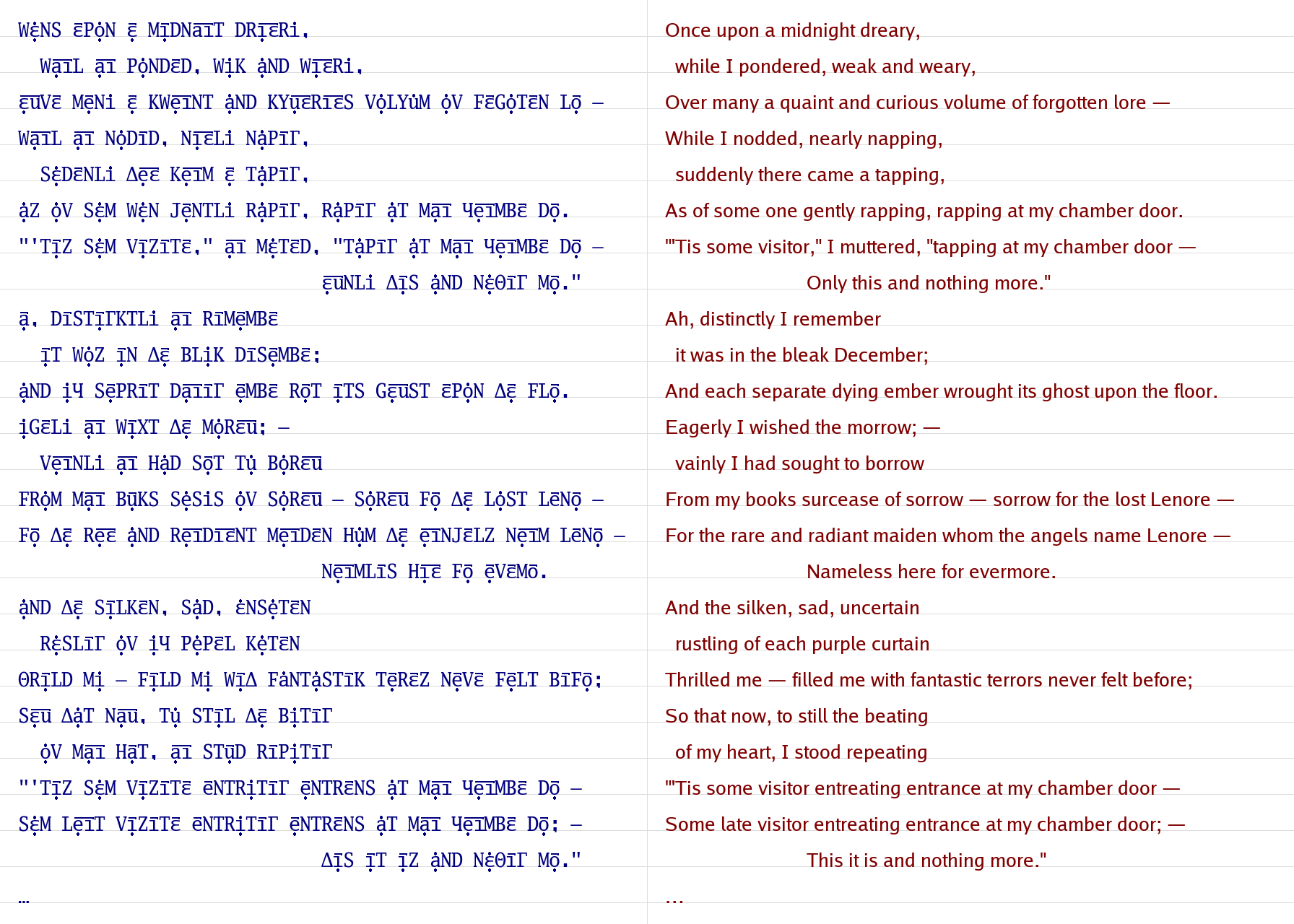 Admittedly, this is reminiscent of iorz feixfuli, which isn’t flattering.

There’s not really a software product associated with all of this, but I’ve uploaded to Github the small program used to mash the Go Mono font with the Britfone pronouncing dictionary to generate the images above.

If you found this interesting, you might also enjoy these Wikipedia pages: